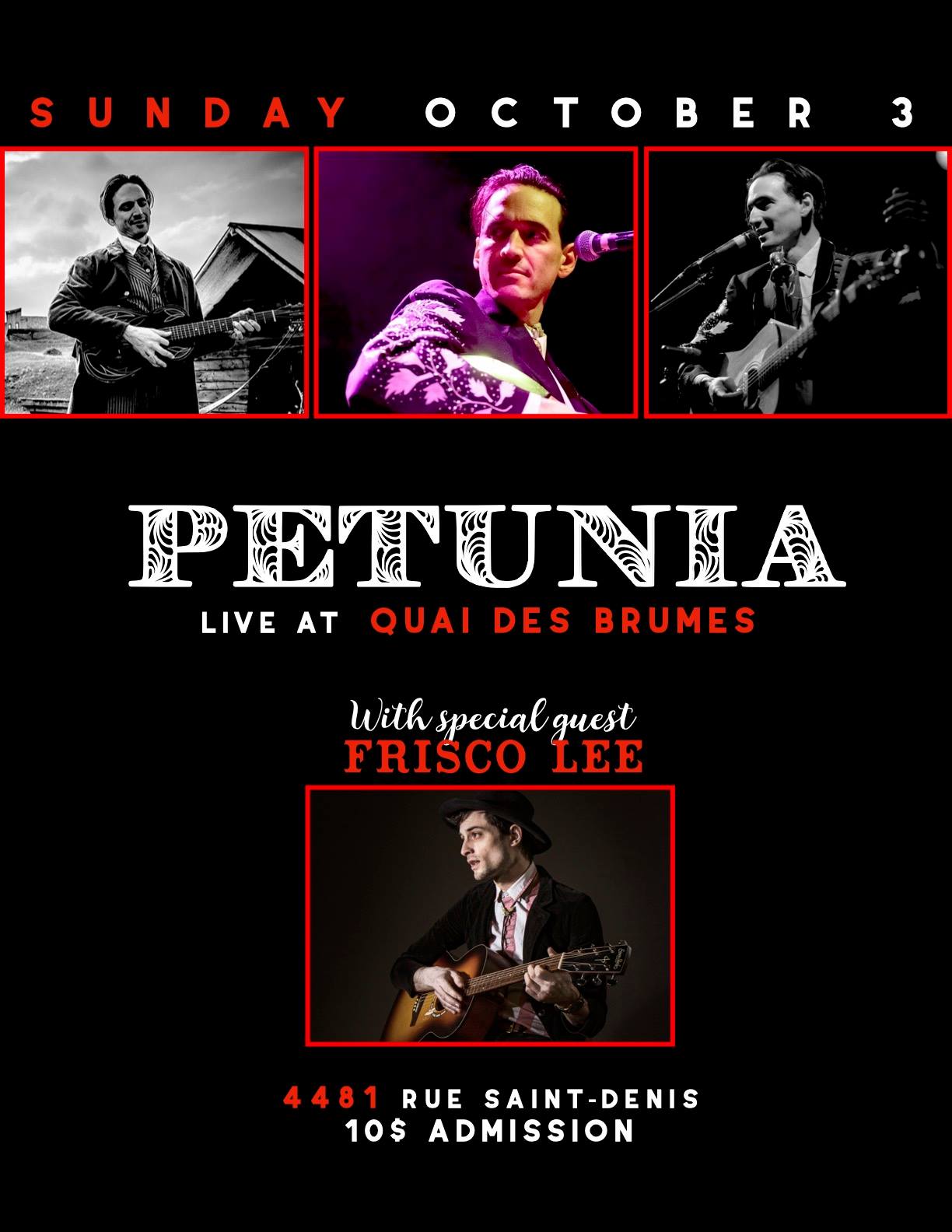 Join us in jolly jumpin’ joy at Montreal’s legendary Quai des Brumes (4481 Rue Saint-Denis) on Sunday, October 3rd as we welcome the mythical PETUNIA and local yokel FRISCO LEE. It’s gonna be a night of solo swingin’, hollerin’ and stompin’!
10$ Admission // Proof of vaccination required!
==================================================
« Petunia is more than just an entertainer, he’s a modern musical enigma. Imagine that David Lynch and Nick Cave had a hillbilly baby, that yodeled… or Tom Waits meets Elvis at Woody Guthrie’s hobo junction. This is just one way of describing the man known simply as Petunia. He’s an adventure seeker, a poker player, and a mysterious stranger. He’s been referred to as “The Savior of Country Music”, and a man who exists in a different era, bringing the past forth as something new to be celebrated and not forgotten. »
LINKS:
– https://www.youtube.com/watch?v=cI0b95xzm80
– https://www.youtube.com/watch?v=vp56C2w2eSk
==================================================
« Frisco Lee is a Montreal born-and-raised musician who’s been anchored in the underground music scene for almost a decade. Anglophone-francophone, hailing from the suburbs and armed with a Blues background, he began playing the bar circuits in 2013 – including residencies at Grumpy’s and Honey Martin – and hosting the Bar de Courcelle Open Mic, lending his talents to a slew of bands and unique songwriters, as well as being an on-hand sound engineer and producer. A few years ago, he began cultivating a widely-varied collection of self-penned songs in the style of old Blues, Country, Folk and Jazz, striking a contemporary chord with Indie and Psychedelic stylings, and passionate about creating timeless sounds and pertinent poetry. He takes to the stage with his self-penned songs, which lie somewhere between Ray Charles, Bob Dylan and Tom Waits. »
LINKS:
– https://friscolee.bandcamp.com/music
– https://www.youtube.com/channel/UCIADX4z1I7H008UrA99GIDg